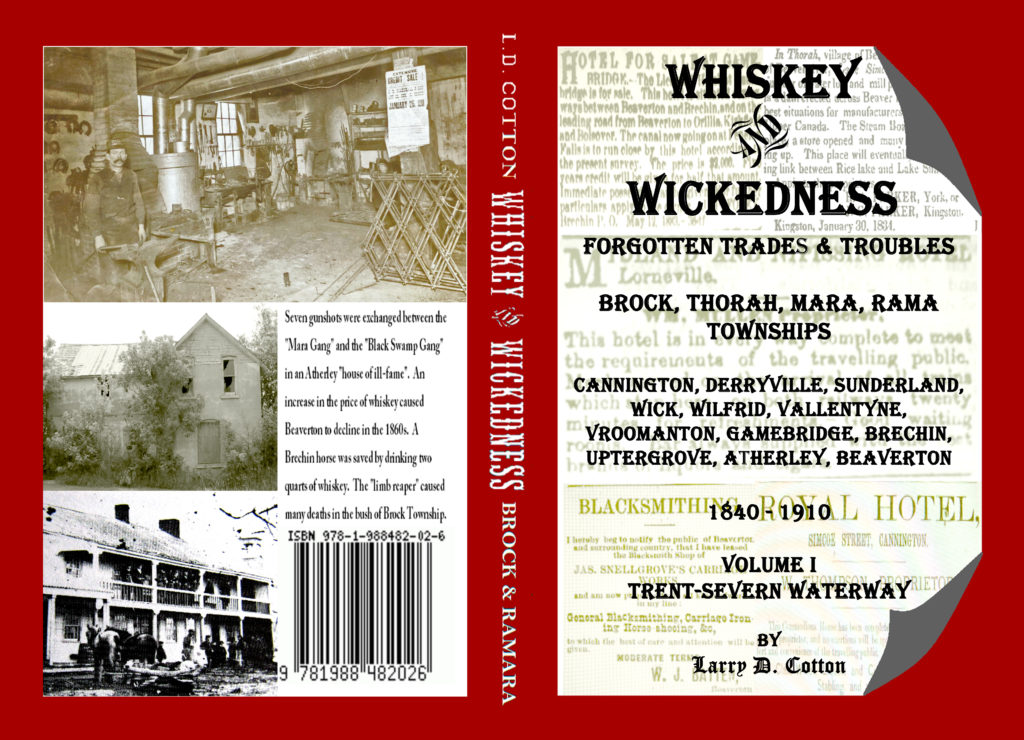 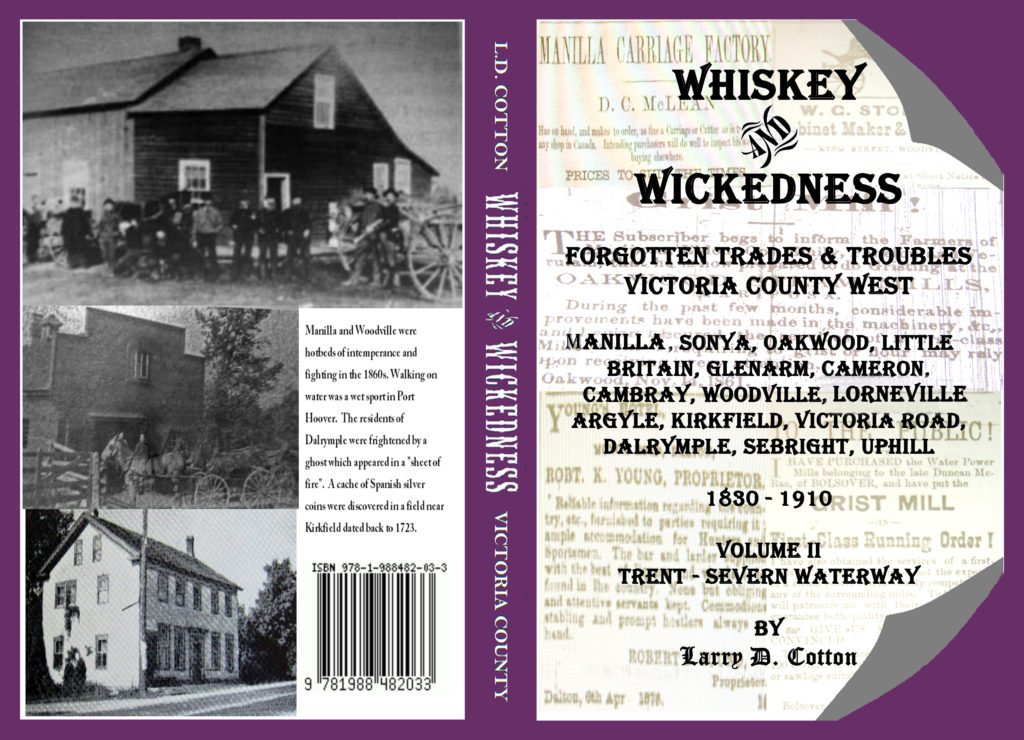 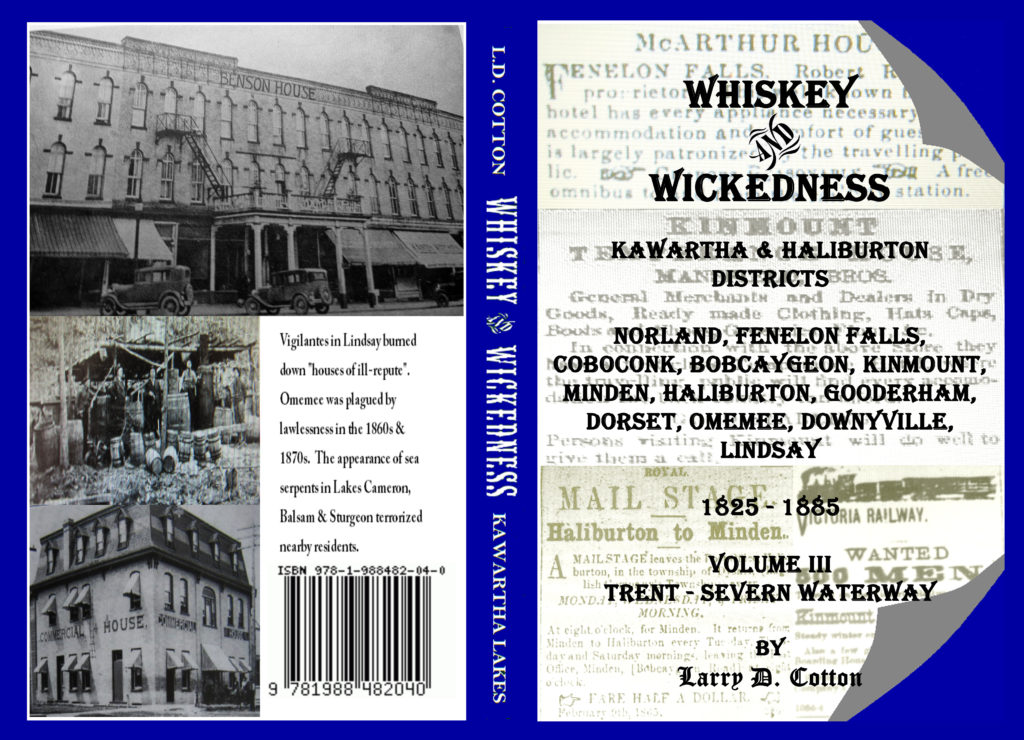 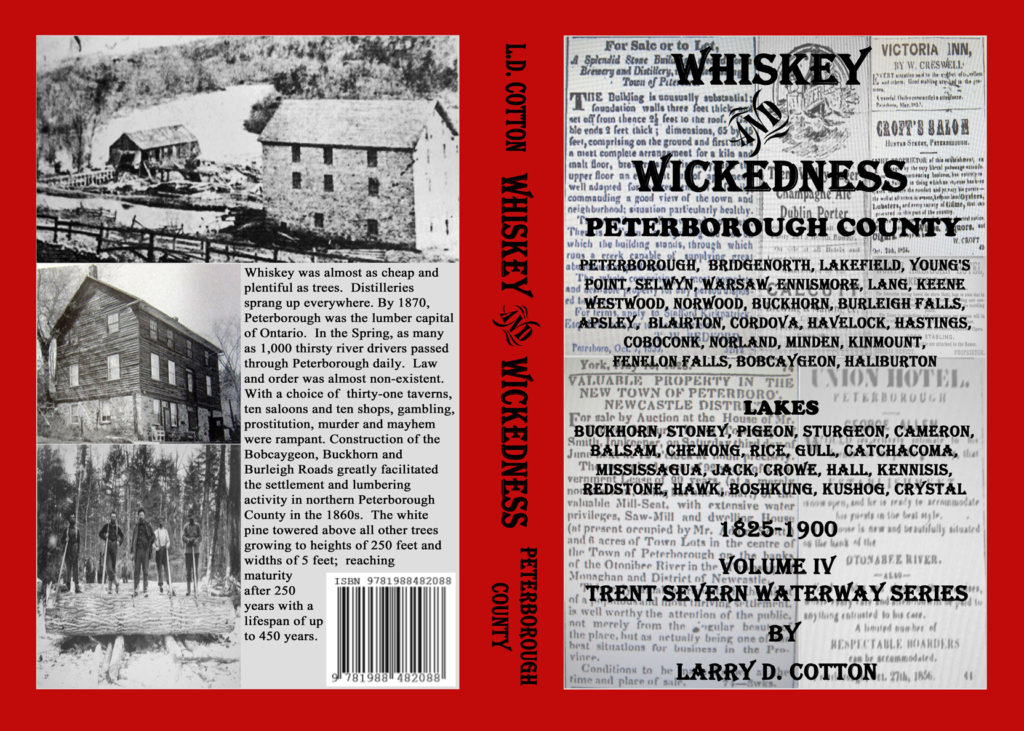 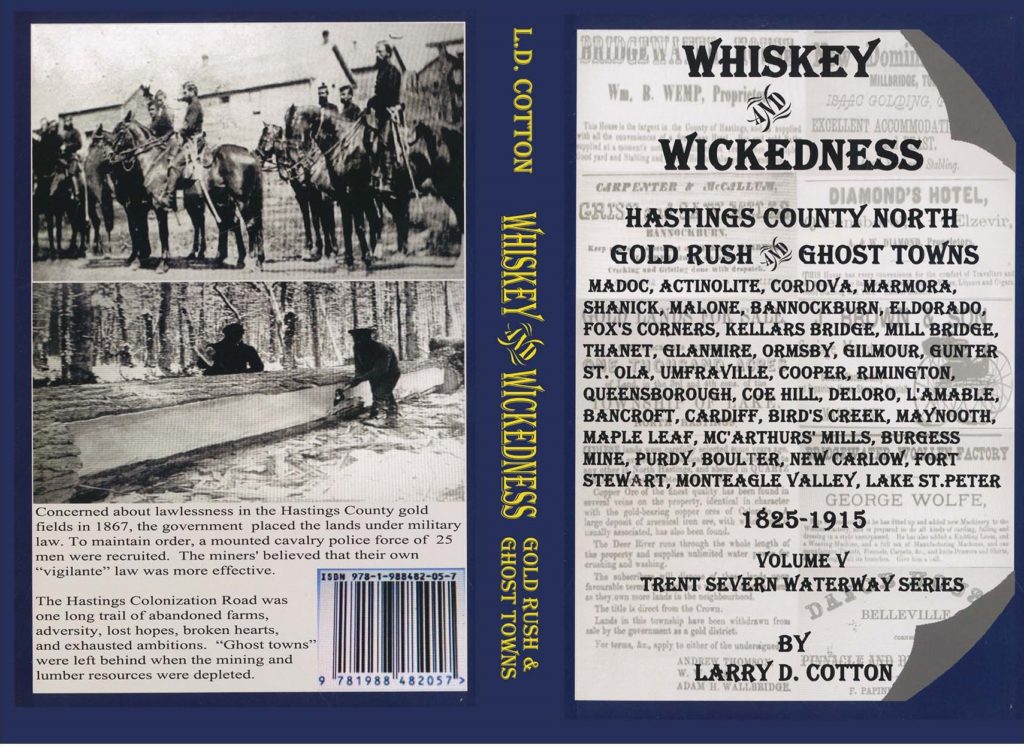 Vol. I Trent-Severn Waterway: Forgotten Trades and Troubles. Brock, Thorah, Mara, Rama Townships.
Seven gunshots were exchanged between “Mara Gang” and the Black Swamp Gang” in the Atherly “house of ill fame”. An increase in the price of whisky caused Beaverton to decline in the 1860s. A Brechin horse was saved by drinking two quarts of whiskey. The “limb reaper” caused many deaths in the bush of Brock Township.

In the 1860s walking on water was a wet sport in Port Hoover. The residents of Dalrymple were frightened by a ghost which appeared in a “sheet of fire”. A cache of Spanish silver coins were discovered in a field near Kirkfield dated back to 1723. Manilla and Woodville were hotbeds of intemperance and fighting

Vol. III Trent-Severn Waterway: Kawartha and Haliburton Districts  (Available May 2018)
Vigilantes in Lindsey burned down ” houses of ill-repute”.  Omemee was plagued by lawlessness in the 1860s & 1870s. The appearance of sea serpents in Lake Cameron, Balsam and Sturgeon terrorized nearby residents.

Whiskey was almost as cheap and plentiful as trees. Distilleries sprang up everywhere. By 1870, Peterborough was the lumber capital of Ontario. In the spring, as many as 1,000 thirsty river drivers passed through Peterborough daiy. Law and order was almost nonexistent. With a choice of thirty-one taverns, ten saloons and ten shops, gambling, prostitution, murder and mayhem were rampant. Construction of the Bobcaygeoon, Buckhorn and Burleigh Roads greatly facilitated the settlement and lumbering activity in northern Peterborough County in the 1860s. The white pine towered above all other trees, growing to heights of 250 feet and widths of 5 feet; reaching maturity after 250 years with a lifespan of up to 450 years.

Concerned about lawlessness in the Hastings County goldfields in 1867, the government placed the lands under military law. To maintain order, a mounted cavalry police force of 25 men were recruited. The miners believed that their own “vigilante” law was more effective.

The Hastings Colonization road was one long trail of abandoned farms, adversity, lost hopes, broken hearts, and exhausted ambitions. “Ghost towns” were left behind when the mining and lumber resources were depleted.

Trenton was the terminus of the vast pine resources of the Trent Severn Waterway, including the Peterborough, Kawartha, and Haliburton Districts. The Moira River was the economic lifeblood of liquor and lumber in the County. This ‘whiskey river” facilitated distilleries; breweries and taverns. Belleville was a town where easy money consorted with easy virtue. Painted ladies entertained clients in the hayloft of the livery stable of a prominent Belleville hotel. In 1905, Hastings County’s 94 cheese factories were an important social and economic part of rural community life.

Order from the Whiskey & Wickedness Series: price list. Place your order via email to Larry D. Cotton at
ldcotton@sympatico.ca

Purchases can be made via e-transfer to ldcotton@sympatico.ca or cheque payable to Larry Cotton and mailed to:
P.O. Box 2008,
57 Foster St,
Perth, ON
K7H 3M9.

Theme by Anders Noren — Up ↑